European diesel SUV’s are not designed for class 3 hitches, but your RV dealer can custom fit any of these vehicles.

We receive a lot of calls from people who want to tow with one of these diesel SUV’s; the Volkswagen Touareg, BMW X5, Mercedes ML, GL, and R Class. All of these vehicles come from Germany, and they all perform quite similarly, with 3.0-liter diesel engines producing over 400 lbs. of torque, mated to 6-8 speed transmissions. 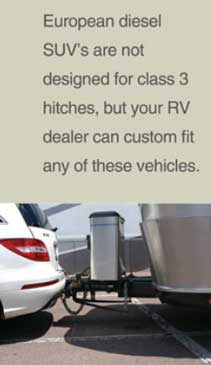 All of the vehicles in this group have plenty of power to tow almost any trailer, although if you plan on spending that much on a tow vehicle, to get better fuel efficiency you would probably want to hitch up to a relatively aerodynamic trailer.

Besides having a great deal of torque and a great drivetrain, these are some of the best handling tow vehicles available. They all have independent suspension, precise steering, and short rear overhangs. The models with air suspension are tuned to be softer riding, so they are not quite as stable but still quite good. The exceptional vehicle of this group is the Mercedes R Class.

Though similar to the rest, it has a 124.5” wheelbase with a very short rear overhang and though not sprung overly stiff, the incredibly short overhang to wheelbase ratio makes it very stable. Friends that we travel with tow their 34’ Airstream with an R class. Last summer I drove it from Boston to the center of New York State on a mix of interstate and hilly two-lane roads. At the end of the trip, I really did not want to give the keys back.

Although the R class is hands down the best tow vehicle of the bunch, it has the lowest tow rating at 3500lbs. I guess since it is the most van-like of the group, Mercedes figured they would give it a van tow rating. The rest of the diesel SUVs in the group are rated in the 7000-pound range with one very confusing problem – the manufacturers all advise against using a weight distribution hitch – and that is why we get so many telephone calls on this subject.

Certainly, there is no way to tow a 7000-pound trailer safely or comfortably without using weight distribution, so how could these very sophisticated vehicle manufacturers have those high tow ratings while opposing the use of eight distribution hitches? The answer is a long story. 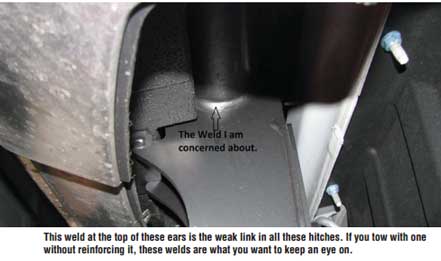 The weight distribution hitch was invented in the early 1950’s by a blacksmith – M.H. Mathison, of California. His invention was an immediate hit, and suddenly he had a very fast-growing business. He expanded rapidly in California and then built a second factory in Indiana. I met Mr. Mathison when I was just a youngster, he opened a factory in London, Ontario and my father’s partner, Al Hamill, lent him the money for the deposit on the land because the seller would not wait for a wire transfer, which in those days took a couple of weeks.

Unfortunately for European RVers, he also thought it would be a good idea to sell hitches in Europe, so he flew over to check out the trailers there.  What he discovered were very light but flimsy trailers using mechanical surge brakes with chassis far too weak to withstand the pressure from weight distribution. Mr. Mathison noticed that most of the chassis was made by one company, so he went to visit them. He suggested that if they were to install electric brakes (weight distribution does not work with surge brakes) and make the “A” frames stronger, they could use his weight distribution systems and the trailers could be larger and stronger with more amenities, which in his mind would be good for the industry.

"The result was that the chassis company took the protectionist route, and managed to get electric brakes and weight distribution hitches outlawed in seven major European countries."

Unfortunately, the chassis company saw it differently – they thought if weight distribution hitches became accepted, then nothing would stop people from importing the much cheaper trailers from the USA, and they would lose their chassis business. The result was that the chassis company took the protectionist route, and managed to get electric brakes and weight distribution hitches outlawed in seven major European countries. So to this day, even with all of their advanced cars, trailers in Europe are towed with brakes using the same technology as a Model “A” Ford and hitches from the same era.

This diesel SUV’s come from Germany, and the engineers come from there as well, so they have no exposure to weight distribution hitches and it seems that they do not really understand them. You will never get an engineer to endorse something they do not understand. Still, in all fairness, most of domestic car builders don’t truly understand how to set up a weight distribution hitch either.

People often interpret the recommendation against weight distribution hitches to mean that the body structure is not strong enough to withstand the force of the hitch. This is not the case at all – these SUV’s all have very solid body structures; they are among the strongest vehicles on the road. However, like many vehicles, their optional hitches leave little to be desired.

Until 2011, the Mercedes hitch was very weak and we saw many broken ones. The new Mercedes, BMW and Touareg hitches are better and are likely to work fine with many of the lighter trailers. Still, the hitch designs make me a little nervous as they use two long ears from the hitch receiver tube that weld to a round cross tube several inches above. When we set these vehicles up for towing a travel trailer, we extend the hitches up to a structural member between the back wheels. I do know there are large numbers of people who are towing with the Touareg and the BMW without this strengthening of the hitch. The R class does not come with a factory hitch, and there is a relatively weak bolt on class 3 that definitely requires strengthening.

If you want amazing fuel economy, none of these diesel SUV’s are likely to be the best tow vehicle, but they may be an excellent choice for all-round use. The 3.0 litre diesel is also available in the BMW 3 series sedan where it delivers truly amazing fuel economy.

Interestingly, as we are starting to see more diesels, the fuel economy of gas engines is getting closer. This summer, when I was traveling with my family and towing an Airstream, the Ford Eco-boost in the Taurus was only 15% behind the Mercedes in fuel economy. The new Chevy Traverse with the direct injection 3.6 litre is pretty close in fuel economy, but it does not have the massive torque of the diesel or the Eco-boost engine, but the vehicle is a lot less expensive. At the moment, Chrysler likely has the most fuel efficient SUV tow vehicle, with their large 3.6 litre V6 engine mated to an 8-speed transmission.

In 2013, you will be able to get Jeeps, Durangos, and Chrysler 300’s equipped with a 3.0 litre diesel or the 3.6 litre gasoline engine. It will be interesting to see how these compare when they arrive.