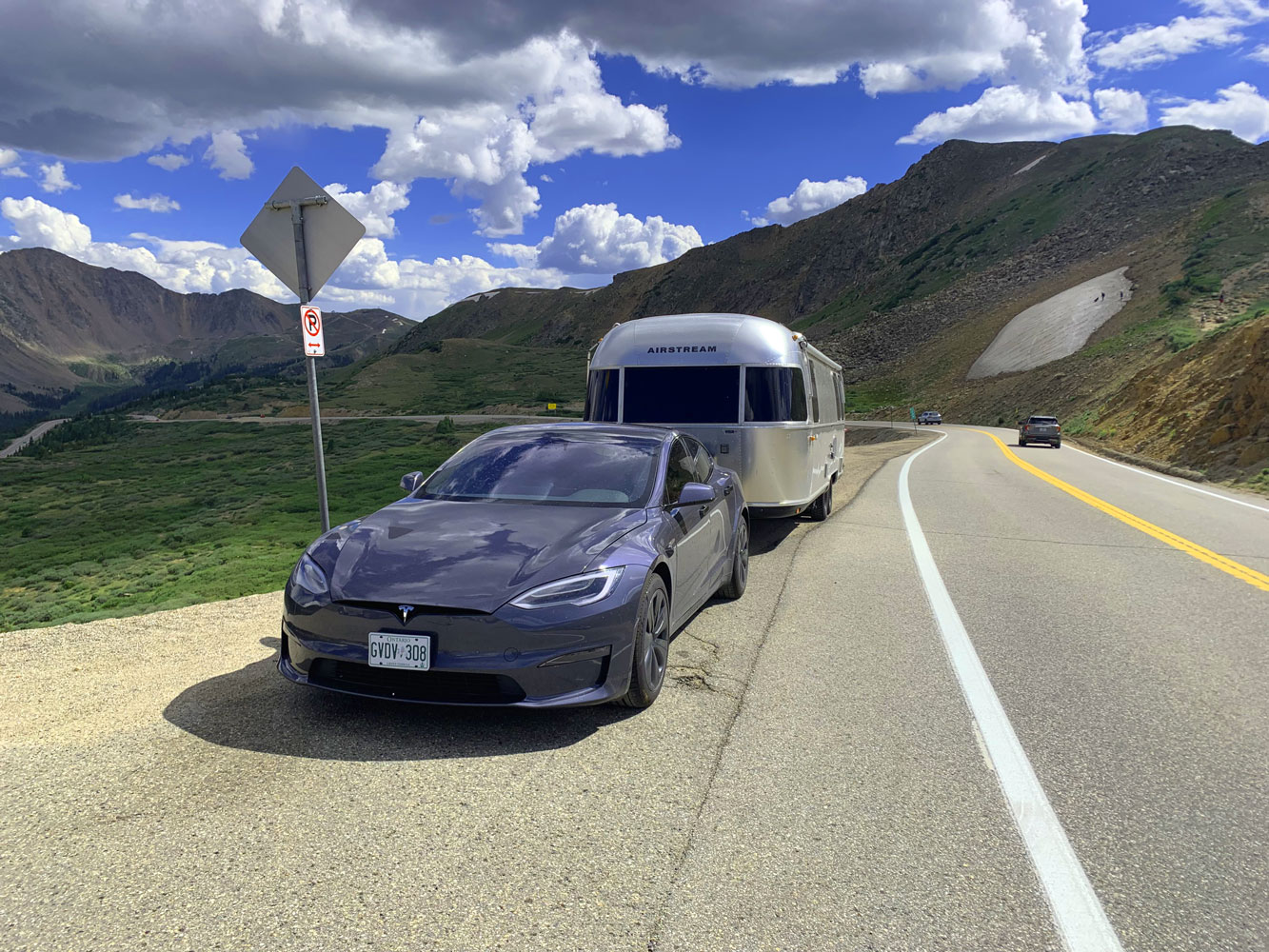 What is it like to do a Tesla Road Trip? Towing an Airstream!

One of the things I have been wanting to do since we got our first Tesla in December 2019 is get it on trip to Colorado to see how it handled climbing in summer heat and just to see what a long road trip would be like. The perfect opportunity presented itself in July. The Airstream dealer council Meeting was scheduled for Colorado Springs starting the afternoon of Sunday July 17th. With flights such a mess I was not planning to fly anyway so perfect. I used the 2021 Model S Long Range and towed the 27’ Airstream that we have even further streamlined for electric towing.

My son in law Dan who works with me thought flying would be better. He planned to fly out of Toronto Sunday morning scheduled to land in Denver at 10:10. The plan was I would pick him up at the Airport, If I was late, I would have to pay for his Uber or Taxi to Colorado Springs. If he was late, he was paying. What would be more reliable Towing with a Tesla 1,400 miles across the plains in 2.5 days or a flight?

I left late Thursday afternoon at 3:45 A list of stops and the timeline is below. This trip was a revelation for me in that I discovered I have done road trips wrong my whole life. Stopping every 90 minutes or so is actually a great way to travel. At the end of a 5–600-mile travel day I was not tired, sore, or stressed, it is a very relaxing way to eat up miles. I suspected that but had no idea how much more relaxing it would be. The bottom line is that towing with a gas car you are doing well to travel 5-600 miles in a day, and you still can with a Tesla you just use your time differently. It was funny to see vehicles pass you late in the afternoon that had passed in the morning.

When I woke up in the morning, I would grab a drink and snack for the car and drive to the next super charger. Usually, 60-90 minutes away. While the car was charging, I would have breakfast. At the second charger I would have a shower by the third it was lunch time. I was using the charging time for things I would have had to do while I was stopped with the gas car anyway. 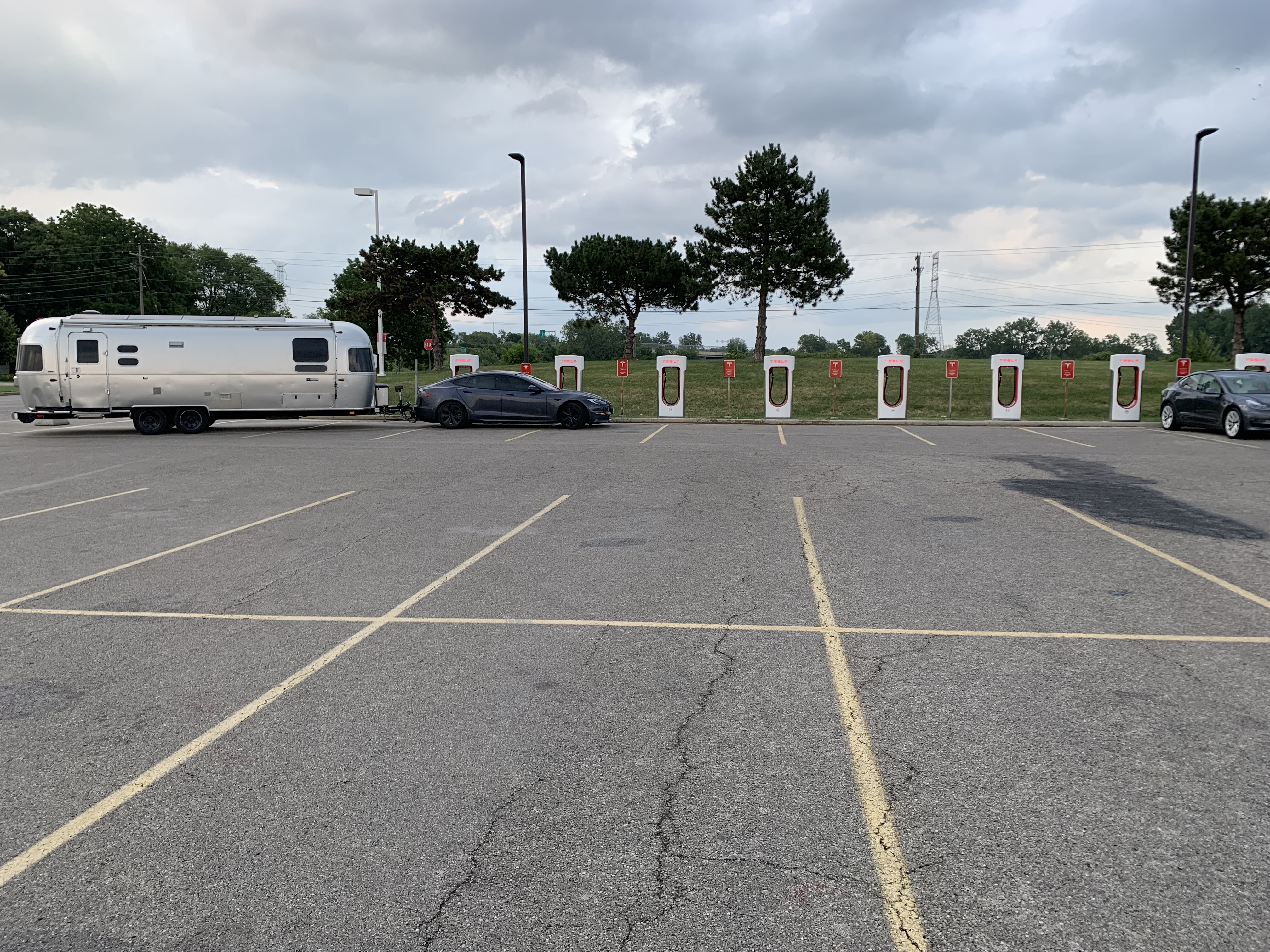 When you get fuel you have get out your credit card activate the machine and then stand there while you fill up and then you have to get out of the way right away, so if you want to have lunch you find another place to park. With the Tesla you just plug in the charger and walk away. It knows it’s your car and it just bills it. On occasion you do have to disconnect the trailer, on this trip I needed to disconnect 8 times in 3508 miles. I have the hitch configured so it is pretty quick process 2 minutes to disconnect and less than 4 to reconnect. Then again, I have often waited 5 minutes for the gas or diesel pump I needed to free up so not much different time wise, a little more work. Or to put it another way I spent far more time in a traffic jam East of Indianapolis than I did connecting and disconnecting for the entire trip.

The other factors that keep the drive relaxing is that it makes no sense to go over 60 MPH as the additional charging time is longer than the time saving. You’re rolling along in the right lane rarely having to pass anyone just the odd truck. When you do need to get over a lane the acceleration is almost instant, so merging is simple. The Tesla actually steers itself when you want it to, however it steers so easily I rarely use it. I think the quietness of the interior is less draining as well.

Navigation is easy with the giant screen equipped with google maps just touch the lightning bolt and the superchargers pop up. Touch the one you want, and navigation starts. The navigation gives you an estimate of the battery remaining when you arrive, it is optimistic at the start of the segment but gets more accurate as you drive. As you approach the charger the battery temperature is automatically optimized for fast charging. Tesla’s network really is fantastic and getting better all the time, I never found a charger that did not work. I have completely given up on the other chargers as they are too much of a hassle and unreliable. 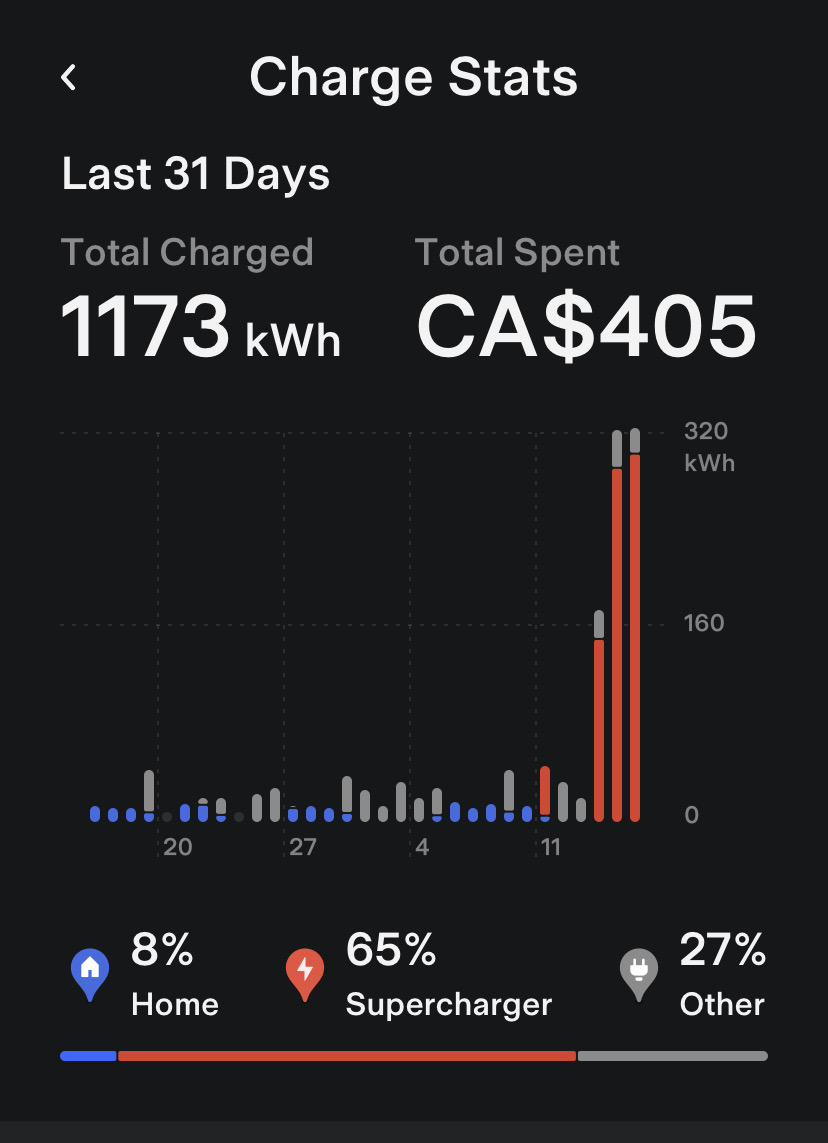 With an electric car efficiency is measured as Watts Per Mile or Kilometer. For this trip I averaged 638 Watts per mile at a 60 MPH cruising speed. The Trip Screen is quite handy for ensuring you’re within range of the next charger. It automatically gives you your average since the last charge, I used Trip A to keep track of the entire trip and Trip B for intermittent checking. For example, just East of Denver I70 heads south for a while. Before I reached that point, I could see from flags etc. that there was a strong cross wind from the south which would become a headwind after the turn. Once I made the turn, I reset Trip B to see what my WPM were to make sure I was not pouring through power. Unlike a gas engine there is no sensation at all when you are using more power just a little bar graph on the Dash. Besides using

the Trip Screen the Nav has the distance to the next charger. Usually by the time I was at a 50% (50,000 watts) charge I would have less than 50 miles to go so plenty of extra range. I could see this comparison anytime at a glance, so it is easy to keep tabs on.

The trip out to Denver along Interstate 80 was simple so I thought I would take a more challenging drive home along I70 which is much busier and goes through several large cities. I would also be driving home over the weekend in July when the chargers are at their busiest. I never did have to wait to charge, and it was as easy as I 80.

Now about those mountains, basically it’s what mountains? Tesla does not even acknowledge them. After our meeting we went back north to Denver and headed west on I 70. This takes you up over 11,000 feet where you cross through the Eisenhauer Tunnel followed by 7 miles of 7% decent, that grade put 8% back into the battery, brakes were never needed. In the Valley we charged in Silverthorne to 80% and continued west over Vail Pass (10,600’) to Vail where we turned around and returned to Silverthorne.

Interestingly the watts per mile on this segment was less than running on level ground. I thought “how can that be with all that climbing” but I guess that is a gas car mindset. Where a gas engine will need to rev up in a lower gear and richen its fuel mixture to climb the Electric doesn’t have a decrease in efficiency when climbing and it recharges on the decent so mountains don’t decrease efficiency. The reason I think the usage is actually lower though is that leg was all between 8000 & 10,800 feet of elevation so thinner air and therefore less aerodynamic drag?

After topping back up in Silverthorne we decided the Interstate was too easy, so we took Hwy #6 back to Denver which crosses 12,000 foot Loveland Pass on a twisty two lane highway. On this road the Tesla ran with the car traffic accelerating easily out of switch backs and again brakes were not needed on the decent.

As you can likely guess everyone asks what your range is but now, I understand it really does not matter that much as you rarely use the entire range anyway. No where on this trip would I have had a problem towing with the model 3 with its 75 KW battery (new Model 3’s have 84 KW). Ironically after everyone asking me about range all the time I saw a trailer on the side of the road in Kansas it was 43 degrees C and the fellow was starting to walk to the exit 3 miles away. Turns out he was out of gas, so gave a lift to a person out of gas to the station in the electric car.

Towing with the Tesla is an adjustment but an easy one. Once you experience the quiet, instant acceleration and rock-solid handling it would be difficult to go back to a gas engine. Though some will tell you electric cars are being forced by the government, it’s customer expectation that is going to make them happen.

On this screen Trip “A’ is the stats for the total return trip, Trip “B” is just a quick check to check the usage as the last bit home I ran faster. Then the numbers since the last charge are always there. 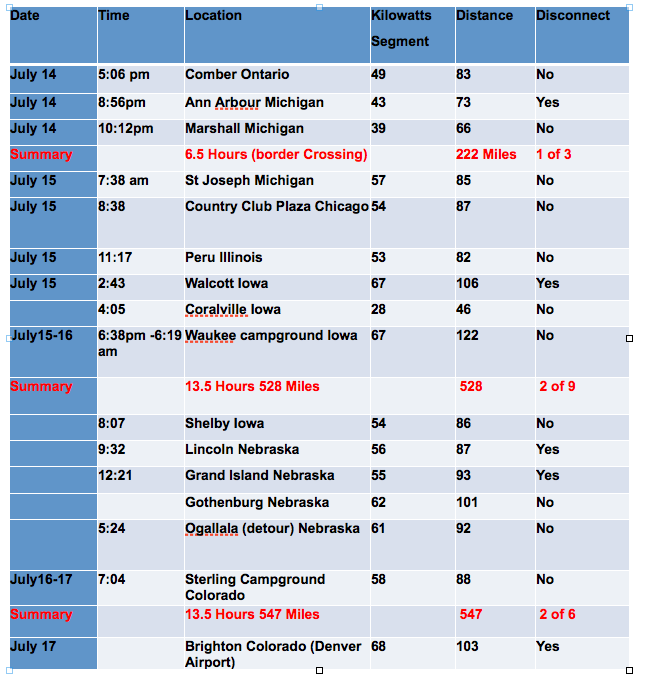 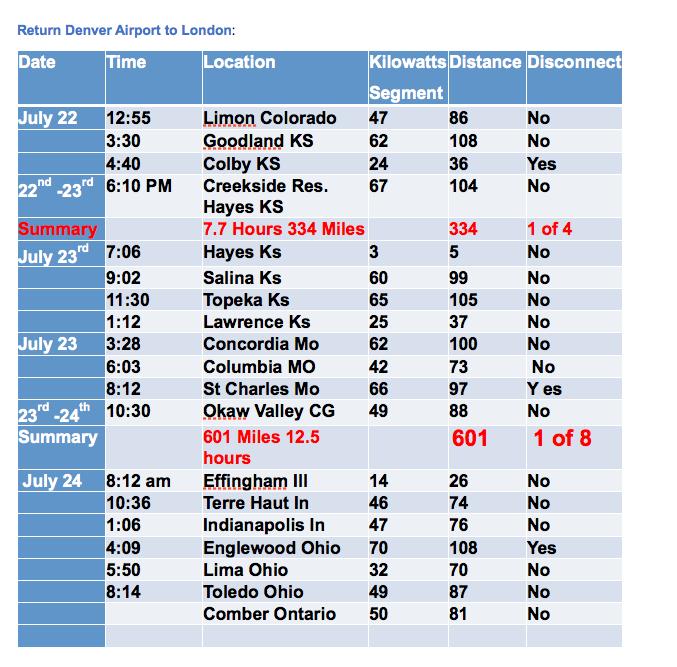