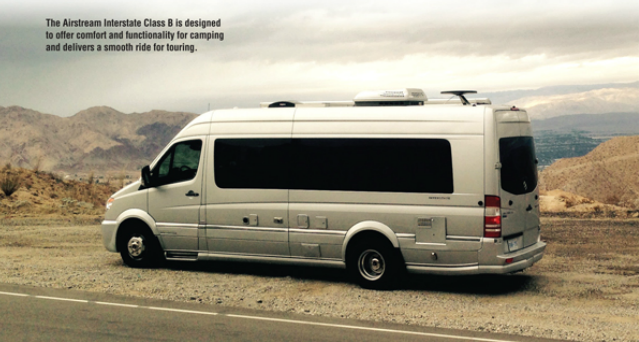 Traveling In a “B”

My wife, Heather, and I have always tended to use larger units for our travels. Other than one trip in a 23-foot Airstream for two weeks and a couple of short trips in a 25-foot Airstream, most of our RV experiences have been in 30’-34’ trailers and 36’ fifth wheels.

We have used a Class B motorhome a couple of times in the past to attend shows in Toronto so we could just sleep in the parking lot instead of getting a hotel. Since the Airstream Interstate seats nine I have also used them for wine tours and tailgating, but I have never taken a vacation in one.

I recently wrote this column from an Airstream Interstate B van on a beach in San Diego, CA. It turned out we had a little Alto trailer to be delivered to Phoenix, AZ, about the same time as I was attending a meeting in South Dakota. Since it takes three flights to get from London, ON, to South Dakota, you can drive it just about as quick with a lot less frustration.

So, since I was going to be almost halfway to Phoenix, I volunteered to deliver the little Alto. My wife decided this would also be a good excuse for some vacation time in the warm weather which left me thinking about towing a combination to Phoenix.

A better solution came from my sister and her husband who decided they would like to use their Airstream Interstate out west this spring but did not have time to drive out. So, we decided to take the Interstate, store it in Los Angeles, and then fly home. I thought what it would be like to spend a couple of weeks in a unit much smaller than I ever thought I would. In summation, it was a lot better than I had expected.

"The only downside was the trip from London to South Dakota was very windy, which you feel more than you do with a car and an Airstream in tow."

Since my wife made the mistake of marrying a morning person ( I wake up about 5:00 a.m.), I would just slip out of bed, get behind the wheel and have 200 miles covered before she wakes up, so you can really eat up the miles in this unit. The only downside was the trip from London to South Dakota was very windy, which you feel more than you do with a car and an Airstream in tow.

Although Heather has often towed the Airstream in just as substantial cross winds, she lasted about 20 miles in the Interstate and turned the wheel back over to me. Once we were in less challenging conditions she was very comfortable driving it.

I think changing the front tires to a lower profile would help a great deal. The current ones were tall sidewall 215/85R x 16LT tires. The single wheel vans have 225/75R x 16 tires, which are quite a bit more direct and Michelin offers its fantastic XPS Rib in that size.

There’s also larger rear sway bars available aftermarket so I might experiment a little with one of those in time. On the other hand, none of our customers have complained about the handling so maybe I am just being too picky.

My other pet peeve about the Interstate has always been the lack of power seats, but there are a number of manual adjustments so it’s not difficult to find a comfortable driving position once you figure them out. It must have been pretty good as twice I knocked off 1,000 miles in a day.

Of course, the great thing about driving this unit is the ease of getting in and out of places that you would not take a larger RV. Since this design originated and is based on the tighter roads of Europe, the front wheels will turn quite sharp giving it a turning circle of only 47’; not bad for a 24’ vehicle. The narrow overall width helps as well.

With great mirrors, a colour back-up camera, plus front and rear parking sensors, you can park in a standard parking spot. When we visited friends in Palm Springs for dinner one evening as we were passing through we were able to park on the street in their gated community. 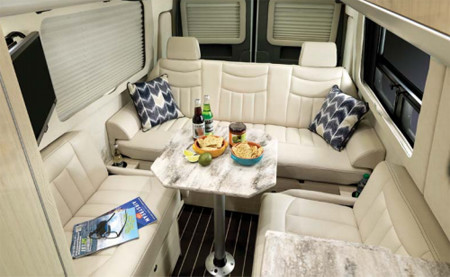 For our five days in San Diego, where we wanted to visit the city quite a bit, we simply rented a car for $140. This also allowed us to get into parking garages or run to the shore if we needed something for dinner.

One of the reasons we like to travel by RV is that we sleep in our own bed and use our own bathroom. No matter how nice the hotel is, it just isn’t our space. It occurred to me that in all the units I have ever used I'd never utilized a “wet” bath (where the entire bathroom is the shower). It turned out that it’s actually not that bad.

In the Interstate, the entire bath is one piece of molded fiberglass so it drains easily and water doesn’t collect anywhere. The bath sink is tiny but if you spill some water while shaving it just goes down the shower drain.

One thing I did find was that if you run the exhaust fan in the bathroom the suction pulls the shower curtain in against you which is not overly pleasant. So I put the Fan-Tastic Fan on in the other part of the van and opened the bath vent without the fan. This draws the steam out and keeps the curtain sucked against the wall.

"Once we figured that out, we could go from lounge to bedroom in less than five minutes, although that method would not be good in Mosquito country or the two nights we spent at -14C."

Making the almost king size bed that is closed-in on three sides was a bit of pain until we got smart. I opened the rear doors, stood outside and made that portion of the bed while Heather tucked in the bottom. Once we figured that out, we could go from lounge to bedroom in less than five minutes, although that method would not be good in Mosquito country or the two nights we spent at -14C. For next time, I will try one of the Super Bag sleep systems, which is basically a sleeping bag with interchangeable sheets held in with Velcro – you just toss it on top and you’re done.

The kitchen area is small but there is a surprising amount of storage when it’s organized. Even the tiny fridge holds more than you would think. After our first trip for groceries we were very careful not to buy too much and then we found that the fridge was only half full with the groceries we bought. In general, there is far more storage than you would think. Every inch is used and we kept finding little cubby’s we didn’t realize were there.

The fridge was an electric compressor instead of absorption gas so we didn't have to be concerned about leveling, which is certainly nice on a motorized unit without power jacks. The key to the kitchen is that only one person can prepare meals at any one time. There is an outside barbeque connection and plenty of space in the rear storage to carry one, allowing one person to barbeque and one person to prepare meals in the kitchen.

The 3.0 litre diesel offered plenty of performance, even when climbing seven percent grades at 8,000 feet. It just dropped to fourth gear and continued up the hill. I did kick the cruise off and let it slow down to 60 mph but I didn’t really have to. Fuel mileage would have been better if I was disciplined enough to slow down a little. Most of the speed limits in the west are 75 mph – a speed at which the Interstate cruises quietly and comfortably so it was hard to make this an economy run.

Fuel economy varied between 13.2 L/100 at 70 mph with no wind to a 16.8 L at 75 mph with a 15 mph head wind. The little Alto tear drop was completely unnoticeable on the back. We have several customers that tow boats, horse trailers and even a couple who tow Airstreams with these vans. They easily handle the towing duties. Like most vans towing a trailer with a weight distribution hitch, the Interstate handles crosswinds better towing than solo.

So, if you have ever thought a Class B motorhome would be handy but were not sure if you could handle the small space, you may be as surprised as I was at how livable and functional they can be.

On another note, I wish Mercedes would bring the crew cab cutaway version of this van to North America. Dress it up with some aluminum wheels and a proper box and it would serve as a nice maneuverable, economical tow vehicle for many mid-profile fifth wheels.

Airstream Only! What do you know about Airstream exclusive parks? 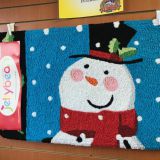 This is not the North Pole...But we are ready for Christmas!