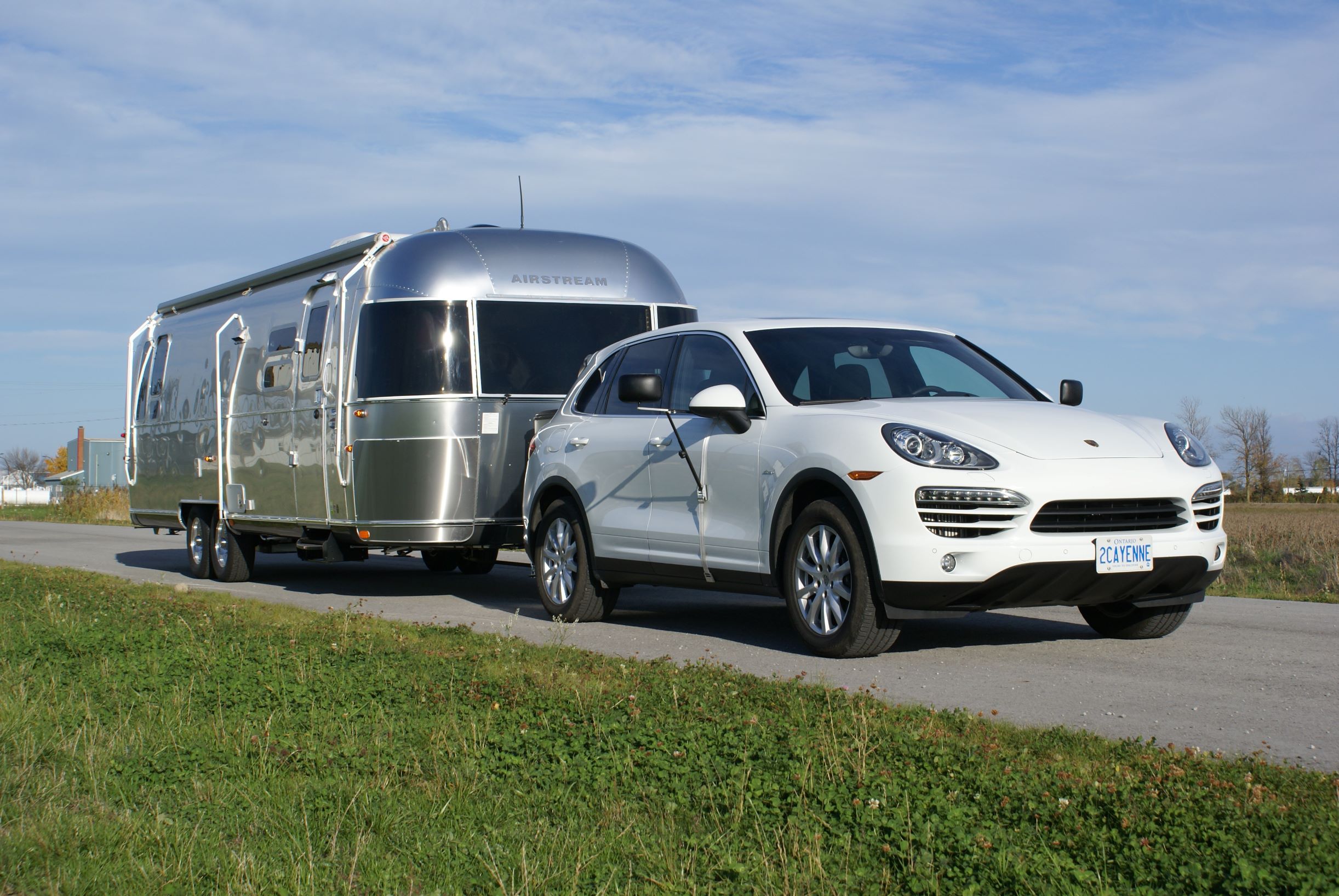 Towing with a Porsche Diesel

Our towing package of the Porsche Cayenne and a 30’ Airstream is a combination that easily takes top honours!

Recently, we had a call from the media liaison crew at Porsche Canada, who wanted to rent an Airstream to tow behind the new Cayenne Diesel at the Automobile Journalists Association of Canada “Test Fest” held annually at the St. Catharine's/Niagara Airport.

My first question was who was going to hook it up – as Porsche is designed for European trailer towing, which is totally different from the North American RV experience. The European engineers work with trailers that are very small and light compared to the North American trailers and they rarely, if ever, use weight distribution hitches. So even though the Porsche is a great handling vehicle, it was not going to tow an Airstream without the appropriate hitch.

The Porsche Canada team suggested that they would deliver the Cayenne to us so that we could hitch it and set it up with the Airstream and then deliver the package to Niagara. The project was an interesting challenge and one of the rare opportunities to try something really cool. Delivering an Airstream with a Porsche certainly attracted the attention of the automotive journalists – so I thought I would share the details with the RV Lifestyle readers.

Thankfully, the Cayenne was already broken in, with 7,000 km on the odometer so I did not have to worry about the break in of a brand new vehicle. One neat little thing on the Porsche is that the cruise control displays the speed you have it set at on the dash. Since I was running a little late, I set the cruise control at 110 kph and as it turned out my average speed was exactly that when I exited the highway in Niagara. The day was windy with a 30 kph north east wind and a solid front corner crosswind for most of the trip.

Incredibly, even at that speed in those conditions, the fuel economy was 14.3 L/100 km, or 16.4 miles to the US gallon or 19.7 to the old imperial gallon. The Jetta diesel is the only other tow vehicle that I have driven that was able to turn in better mileage in those conditions.

For those who like to have plenty of fuel range the 83-litre tank, combined with the excellent fuel economy, should give you an easy 500 kilometer-range per tank when towing a trailer.

The Porsche diesel is shared with the VW Touareg but has been re-tuned to produce 240 horsepower, up from 225. The torque remains the same – a stump pulling 406 pounds. For a diesel, this engine is very lively. It feels like a 400 CID small block from the 60’s but it uses fuel like a V6. It is mated to a silky smooth 8-speed transmission with paddle shifters on the steering wheel. If left in automatic mode, it shifts into eighth gear when towing – even in the substantial winds I was running against. However, it performed much better in seventh gear which is 2,000 rpm at 110 kph. It used sixth gear once on the return trip while climbing Hamilton Mountain but otherwise, the Porsche towed effortlessly in seventh.

Even when towing, this vehicle is very quiet inside. I have a decibel meter app on my phone (which is not likely very accurate) but it works if you compare one vehicle to another use the same app. The noise level in the Porsche is comparable to my Jag or the Taurus SHO – any hint that there is a diesel engine under the hood can only be heard for a couple of minutes after a cold start.

As impressive as the drive-train is, it is not the primary reason why I would buy this SUV. The Cayenne has a rock solid body structure and amazing suspension tuning that really sets it apart. The stronger a vehicle’s structure, the more controlled you can make the suspension. On weaker vehicles, the chassis just twists instead of controlling wheel movement.

The very strong structure comes at a bit of a weight penalty – tipping the scales at 4,795 pounds, the Porsche is a heavy vehicle for its size. Porsche is famous for its suspension tuning, I guess all those years spent getting the 911 to be the world’s best handling sports car despite the engine hanging behind the back wheels has not gone to waste. Even with a strong structure, this is not a harsh riding SUV – it soaks up rough patches of road and pavement strips easily, yet it handles with complete confidence. The very precise steering certainly helps but there is something about the marriage of spring rates, shock dampening and suspension geometry that sets the Porsche apart from any other SUV I have towed with.

They had wind warnings out for the Skyway Bridge as I was crossing it, with a strong north east wind howling right across the road way, but the Porsche and 30’ Airstream sailed across the bridge at 110 kph, completely stable with practically no sensation of the wind howling outside.

As the best combination of ride and handling when towing a travel trailer, I would still have to give an edge to the Mercedes R class with its 126” wheelbase and very short overhang but in a compact SUV, the Cayenne easily takes the prize. I seriously loved this vehicle and $67,500 is not bad for a Porsche.

Makes me wonder how great a Panamerica sedan with its lower center of gravity would be… I doubt that I will ever get an opportunity to try that combination but there is always something to dream of – perhaps I should start buying lottery tickets!