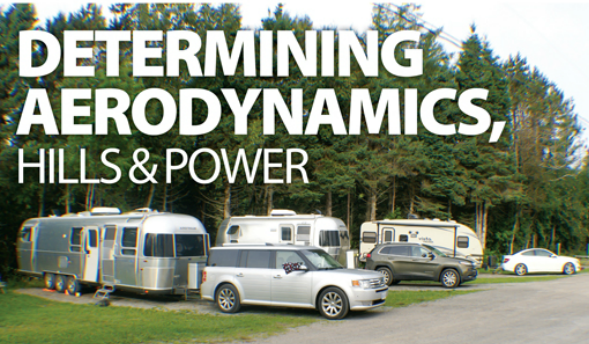 When the Vista Cruiser trailer from Gulfstream was launched six years ago we were excited about its introduction. At the time, many prospective RVers were looking for an aerodynamic trailer to tow with vehicles that did not have enough power to pull more conventional lite trailers. The vehicle could start the weight and handle nicely they just needed a trailer that was a little more efficient aerodynamically.

The 3.0 L Ford Escape is a good example. With the Vista Cruiser’s radius roof design, lower profile and seven foot, six-inch width, the trailer offered reduced aerodynamic drag, making it possible to tow a full-size trailer safely and efficiently for a lot of customers. There are also quite a few people that have larger tow vehicles who simply want a trailer that’s easily towable. The Vista Cruiser’s narrower width makes it easy to see around, yet it is still spacious inside. Over the last few years, other so-called “lite” trailers that have been introduced are taller and therefore, less aerodynamic. For a full-size trailer with flat walls, the Vista Cruiser is about as good as it gets for towing ease.

Earlier this year RVL Technical Editor Garth Cane tested the new Jeep Cherokee and was quite impressed. So, we acquired one for a test drive vehicle at Can Am RV Centre. The first generation Jeep Cherokee was a vehicle people often inquired about when it came towing to a trailer. I think it was the combination of a smaller size vehicle and its tough profile that made people think it would tow well. However, it wasn’t an optimal highway vehicle due to its front and rear live axles, vague steering and short wheelbase. While the body-on-frame structure was rattle-prone, its strength was its off-road capability, which doesn’t necessarily mean it serves as an ideal tow vehicle.

The new Cherokee couldn’t be more different than it was when it was first introduced. It utilizes state-of-the-art technology, and the body structure is tight, solid and quiet. Its four-wheel independent suspension is tuned just about perfectly – it’s not soft, uncontrolled or harsh. Our Limited model has 225/55 x 18-inch tires. Some Cherokee models have 17-inch rims, but the 18-inch tire and wheel combination is certainly the best for towing.

"Combined with its precise rack and pinion steering the handling is quite stable."

The wheelbase is still short at 106 inches but the overhang is only 32 inches so the overhang percentage is a respectable 34 percent. Combined with its precise rack and pinion steering the handling is quite stable. I find it to be more stable than the Grand Cherokee, though it’s not likely as good for off-roading. However, I will be the first to say that I am not an expert in that area.

All Cherokees have a nine-speed ZF transmission with the choice of a 2.4 L multi-air four-cylinder engine or the very nice 3.2 L V6 engine. The V6 engine comes standard with a 3.25:1 axle ratio, but with the towing package there’s a much better 3.51:1 ratio. Even if I never towed a trailer, I would suggest the 3.51:1 ratio as I cannot imagine ninth gear with its very steep .48:1 ratio being very useful with the standard ratio. The 3.51 ratio is not available on the front-drive chassis, so be sure to opt for the all-wheel drive version (it’s hard to imagine a Jeep without all-wheel drive anyway).

The towing package also includes a transmission cooler and a good hitch receiver that, so far, appears stronger than many higher rated hitches. At a mere $495 this package offers very good value. I was expecting optimal fuel economy from this drivetrain since the 3.6 L (that this engine is derived from) does so well in the Chrysler 300M and Dodge Caravan. However, on a recent trip to Nova Scotia, I was starting to wonder about this. 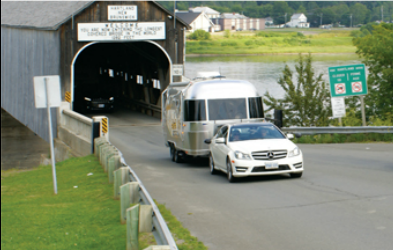 During our trip, our group had three trailers to include a 34’ Airstream with a Ford Flex EcoBoost, C350 Mercedes with (a 3.5 L engine) towing a 23’ Airstream and the Cherokee with a 23’ Vista Cruiser. My friends tend to drive a little quicker than I suggest, at around 110 km/h, so it wasn’t the most economical run. Still, these trips provide good comparisons of fuel economy as you drive down the same road, in the same conditions, at the same speed.

"The Jeep was always the first to need fuel."

On our way to the east coast, the Flex and the Jeep both averaged 50 litres to fill at each gas stop and the Mercedes was averaging 43 litres. The Jeep was always the first to need fuel. From London to Halifax, the Mercedes averaged 16.4 L/100 and the Jeep averaged 20.1. I was curious how much of this difference was due to the Airstream and how much was it due to the Mercedes.

On the way back from Hopewell Rocks, NB to Quebec City, we switched trailers and put the Airstream on the Jeep and the fuel economy reversed. The Mercedes was using 50 litres and the Jeep only 45 litres. I expected the Mercedes to do a little better than the Jeep as it is a two wheel-drive and has considerably less air drag. Nonetheless, I was surprised at how big the difference was between the two trailers.

Below is a quick review of the fuel economy differences (refer to chart). On the last morning of our trip home we slowed our towing speed to 100 km/h and we realized that the extra 10 km/h certainly costs a lot of fuel. At the more sensible 100 KM/h, the Jeep and Vista Cruiser delivered quite a respectable fuel economy. Over the years, I have traveled from the Canso Causeway to Sydney in Nova Scotia with a several different tow vehicles. As I remembered, this road had many large hills, some with passing lanes.

I was anxious to see how our new combinations would do on these grades. Well, either the roads have been re-graded (very unlikely) or these newer vehicles have a great deal more power as we hardly noticed the hills and never lost speed.

I should mention a tire change on the Mercedes. I always find it amazing what one tire size can do for handling. Generally, we go to a slightly smaller, tighter handling tire for towing. In my wife’s C350 we went the other way. It had very aggressive 225/40 x 18” front tires and 255/35 rear tires. They provided aggressive handling and were firm riding. This car was completely infallible when we used it on the race track last fall. I figured for my wife’s daily use, the tires could be a little less aggressive and smoother.

This past summer, it was time for new tires so we increased them one size to 235/40’s on the front and 265/35’s on the rear. At the same time we went to a tire with a slightly softer sidewall. These are still pretty aggressive tires but it’s amazing how much difference this slight change made to the steering precision. If it was my car, I would likely change back to the aggressive tire next time but for my wife’s purposes, the softer ones are fine and it still handles very well.

So what did we learn here? While an Airstream is very aerodynamic, decreasing the speed makes a lot of sense. The Jeep Cherokee is a really nice SUV, especially for the price and the fact that the 3.2 L engine tows the Vista Cruiser extremely efficiently. Tire size does matter more than you think it does, and hills just aren’t what they used to be.